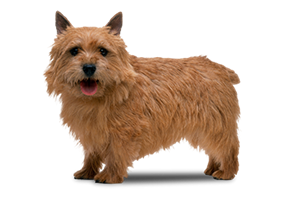 Although originally used as ratters in the stable yard, the Norwich Terrier was later used to bolt foxes that had gone to ground so that their masters could resume the hunt. Today they are more commonly kept solely as companions rather than as a working dog. The Norwich Terrier can be distinguished from its close relative, the Norfolk, by its erect ears.

History of the Norwich Terrier

​The Norwich Terrier was developed in the 1800s in East Anglia in eastern England. Closely related to the Norfolk Terrier (and for many years considered the same breed), it is believed to be related to the Border Terrier and to have been developed by crossing the Irish Terrier with the small red terriers used by Gypsies as ratters in Norfolk.

The breed has been known by several different names throughout history, first as the Cantab Terrier when students began keeping them in their rooms at Cambridge University. Latter they were called Trumpington Terriers after a street in the area they were first developed. Just before WWI an Irish rider named Frank ‘Roughrider’ Jones sold a large number of them to people in the United States, which gave them the common name of Jone's Terriers.

It was Jones that largely developed the breed as we know it today. He had kept several Glen of Imaal Terriers and a dark red brindle Cairn-type female which he in turn bred to a working terrier from Norwich named Rags, who became the sire of the breed.