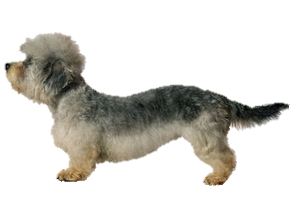 The Dandie Dinmont is the only breed of dog that has been named after a fictional character. Their name comes from the farmer, Dandie Dinmont, in Sir Walter Scott’s novel, Guy Mannering. Even the breed specific coloring of pepper and mustard are adopted from Dinmont’s dogs. A true terrier, they were originally used to exterminate vermin and hunt a wide variety of prey including badgers, otter, rabbit and weasels. Unfortunately, today they are considered one of the rarest of all pedigree dogs, with numbers dropping so low in registries that it is in danger of extinction.

History of the Dandie Dinmont Terrier

​The Dandie Dinmont Terrier has a debated history, although it is generally accepted that the breed was developed around the 1700s. Where is part of that debate, as some sources claim it was along the border region between England and Scotland, while others state the Isle of Skye or even as far as Bedlington. While the location remains lost in time Scotland is credited with its origin, along with the Cairn, West Highland White, Skye, and Scottish Terriers. Thought to share a common ancestry with these other breeds from the old Scotch type terrier, other contributions to the bloodline may include the Dachshund.