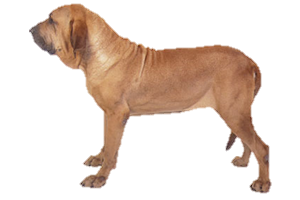 The Brazilian Mastiff was originally bred as all purpose working dogs on plantations. On the hunt they were capable of tracking, attacking and holding the prey (most often jaguars) until their hunter arrived to make the kill. The 'fila' in its name is derived from a Portuguese word meaning 'to hold/secure'. Other tasks included controlling cattle by grabbing them by the ear and working as a property guard. Unfortunately, the Brazilian Mastiff has been used for dog and pit fighting making it banned in several countries as a dangerous breed.

History of the Brazilian Mastiff

​The history of the Brazilian Mastiff begins with dogs brought to the new world by Portuguese Conquistadors and several sources name the now extinct Fila Terceirense specifically as an ancestor. These dogs were likely closely related to the modern day Rafeiro do Alentejo, a Portuguese breed. Later these now "native" dogs were crossed deliberately with the old-style Bulldog, Bloodhound and possibly Mastiff and/or the Bullenbeisser (ancestor to the Boxer).