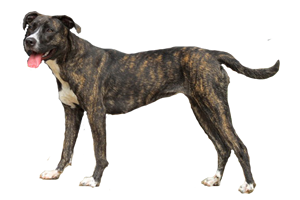 ​The Bardino Majorero is a multi-purpose farm dog from the Canary Islands off the coast of Africa. Their name refers to the unusual brindling of their coat, which sometimes appears greyish-green. They can perform a large variety of tasks including herding and guarding.

There is very little information on this breed as most sources list it as extinct. However, there are a few dogs still remaining in their homeland.

History of the Bardino Majorero

​​The Bardino Majorero were once found throughout the Canary Islands of Africa. It is believed they originated on Fuerteventura and were present on the islands before the arrival of European settlers.  However, some sources state they descend from dogs brought by the Spanish. There is likely truth to both sides as the dog we know today is no longer the one indigenous to the island and whether present or not when the Europeans arrived  it has been diluted by Spanish imports and other crosses.

​Believed to have existed since at least the 1400s, no attempts were made to recognize the Bardino Majorero until the later half of the twentieth century. Today the breed heavily faces extinction due to imported breeds. The Bardino Majorero was long ago surpassed in popularity by its descendant, the Perro de Presa Canario.