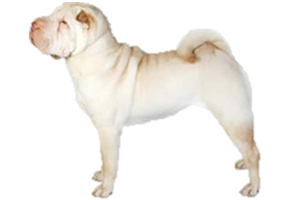 The Chinese Shar-Pei is a breed of dog that originates from China. Their name translates to “sandy skin”, an obvious reference to this breed's unique coat. Once kept as a general farm dog, they guarded livestock, protected the home, and were used for hunting. Their wrinkles kept them protected from large prey such as boar, wolf, and tiger. In later centuries they were used for dog fighting, often against each other. Today they are kept primarily as companions, although some are still used for protection.

In China there is a second variety known as the Bone-Mouth Shar-Pei. These dogs have far less wrinkles and are slimmer and more fit than their more common counterparts. The Bone-Mouth is considered to be the original Shar-Pei before its wrinkles were exaggerated by western breeders. Unfortunately, the Bone-Mouth is not accepted by any major kennel club, which has led to a decrease in their numbers.

History of the  Chinese Shar-Pei

​The exact history of the Chinese Shar-Pei is unknown, although recent DNA testing shows it to be one of the oldest dog breeds in the world. It is believed they are related to the Chow Chow and the lesser known Chinese Chongqing Dog. All of which may have descended from the extinct Han Dog. The Han Dog was a guard dog that existed during the Han Dynasty (206 BC – 220 AD) and effigies show a dog resembling an unwrinkled Chinese Shar-Pei.

In more recent times the numbers of Chinese Shar-Pei decreased rapidly as fighting became illegal. During the rise of communism in China thousands of dogs were slaughtered, sending the breed to the brink of extinction. By 1978 the Guinness Book of Records reported them as the rarest dog in the world and this caused several breeders to come to its aid. Today they are still not a common breed, but they are recognized by all major kennel club and their numbers are secure.