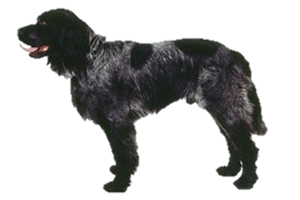 The Blue Picardy Spaniel is one of several French spaniels, a gundog which is used for flushing prey. They search for game birds, which in turn panic when found and appear for the waiting hunter. Once the prey has been shot they will retrieve the birds on command. Originally their primary prey was snipe, although they are adapt at hunting all birds and over any terrain.

History of the Blue Picardy Spaniel

​It is believed the Blue Picardy Spaniel was developed from the Picardy Spaniel in the late 19th century when English Setter crosses took place within some bloodlines. The two were recognized at separate breeds in 1907.