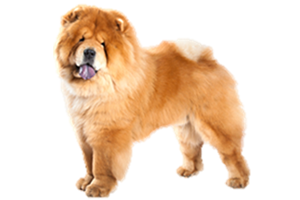 The Chow Chow originated in China where it has been called Songshi Quan, which translates to “puffy-lion dog”. There is debate surrounding the origin of their modern name. Some say it comes from an old pidgin-English expression used to cover all items in a ship’s cargo, basically 'etcetera'. Others suggest that 'chow' is derived from the Cantonese word for 'edible'.

Once a multi-purposed working breed, the Chow Chow was used as a guard, cart puller, hunter, and even as food. Unfortunately, their meat was considered a delicacy, and in some places it still is. As a hunting breed it worked both alone and in packs. These packs could number into hundreds of dogs. Today it is kept almost exclusively as a companion dog.

History of the Chow Chow

​The exact history of the Chow Chow is unknown although recent DNA testing shows it to be one of the oldest dog breeds in the world. It is believed they are related to the Chinese Shar-Pei, and the lesser-known Chinese Chongqing Dog. All of which may have descended from the extinct Han Dog. The Han Dog was a guard dog that existed during the Han Dynasty (206 BC–220 AD). A bas-relief from that period depicts a hunting dog almost identical to today's Chow Chow.

Unlike the Chinese Shar-Pei and Chinese Chongqing Dog the Chow Chow is often included in the spitz family, which would give them a link to the northern breeds. It could be that spitz were the first domesticated dogs in China and the Chow Chow the oldest remaining. This would make sense as all the native Japanese and Korean dogs are spitz.

During the rise of communism in China thousands of Chinese dogs were slaughtered, the Chow Chow among them. However, by then established breeding programs existed in the United States and Europe. Today the Chow Chow remains rare in their homeland, but successfully established in the outside world.