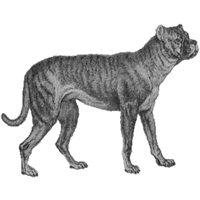 A large, mastiff-like breed, the Bullenbeisser was primarily used for bull-baiting and boar hunting. Although it was capable of taking down all large game. When bred for hunting bear it was often known by the alternative name of Bärenbeisser. Some sources state this as a separate breed. This dog was trained to hold game for their hunters. It would leap up and clamp its jaws on the prey’s nose or ears until they were killed.

The Bullenbeisser had been known in Germany since at least the 16th century. It is believed to have descended from the ancient mastiffs that had existed in the time of the Holy Roman Empire. These dogs were once found throughout Europe. There were several regional varieties of the Bullenbeisser, but the most well-known were the smaller Brabanter and the larger Danzinger.

In the late 1870s, German breeders started the process of creating what would become the Boxer by crossing Bullenbeissers of the Brabanter variety with the Old English Bulldogs. Due to the loss of large game, war, and development of other breeds numbers of the Bullenbeisser declined, and it became increasingly rare. By the end of World War II it had been completely replaced by the modern Boxer.