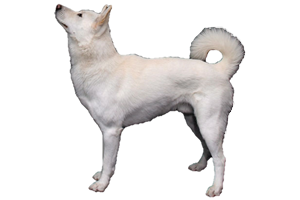 Today the Jindo is kept primarily as a companion breed. It was originally used as a hunting dog, but had secondary duties such as watchdog, property guard and ratter.

Traditionally the Jindo does not work with guns, rather it is turned loose and returns later with its prey. Normally it kills small game, such as pheasant or hare. However if they manage to take down something too large to carry such as deer it will lead their master to the kill. If hunting in a pack one dog leaves while the others stand guard over the dead animal.

History of the Jindo

The Jindo originated on the small South Korean island that shares its name, southwest of the mainland. It is unclear how they arrived on the island and the two traditional legends contradict each other. The first is that it was developed by crossing the native Korean dogs with those brought by the Mongols during the 13th century and the second is that it is the result of a red Korean bitch and wolf mating. Irregardless of how it arrived, the Jindo has been present on the island for centuries. Isolated from other dogs, they bred true on natural selection.

In 1938 the Jindo was declared a National Treasure. It was even spared during WWII when the Japanese killed all other Korean dogs for their pelts to make fur coats. Although it is illegal to export Jindos from the country they have found their way to the United States with immigrants since the 1980s.