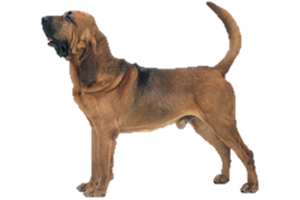 ​The Bloodhound is a scenthound that is known around the world for its superb sense of smell. They were originally used to hunt large game such as deer, boar, and wolves. However, in more modern times they are primarily employed to track criminals, as well as lost and missing persons. Their tracking ability is so strong it allows them to follow a human scent that is 24 hours old.

The exact origins of their name are unknown. Experts persist 'blood' indicates a dog of the royal blood, a noble, or purebred. However, this was first suggested in the 1800s, while older writings claim an opposite view. In the 1400s John Caius described the Bloodhound’s ability to track the scent of blood. Since many hounds were prized for tracking blood trails (wounded animals), it seems more likely this is where they gained the name.

History of the Bloodhound

​The origin of the Bloodhound dates back to the 7th century when the extinct Saint Hubert Hounds were kept at a Belgian Monastery by the same name. The Abby, located in the Ardennes region, was famous for these hounds. This fame rose in the Middle Ages and persisted throughout the Renaissance.

Despite careful breeding, there are no written records of where Saint Hubert Hounds came from. Several theories persist, perhaps the most repeated that they descend from dogs returning with former crusaders from the Holy Land. This seems unlikely, as the Abby and their dogs existed before the First Crusade and no dogs from that region resemble the Saint Hubert Hound or the modern Bloodhound. It seems more likely that the Saint Hubert Hound was developed from French hounds, with foreign blood added at different times throughout the centuries.

The Bloodhound, with their keen nose, became prized by the nobility for use during their favorite pastime, the hunt. For centuries the Monastery sent hounds to the King of France each year. Some kings used them almost exclusively, while others not at all. Whether or not French hounds were the root stock of the Saint Hubert Hound, it certainly influenced the former. Royal favors led to these dogs spreading throughout Europe and gained further favor in England.

It is said the Saint Hubert Hound first came to England with William the Conqueror in the 11th century. However, there is no evidence to support this, as they did not appear in English literature until the 14th century. It is in England where the name Bloodhound or Blooded Hound was first used and where the line began to diverge from their ancestors. It is also where they first tracked humans as well as animals, helping game wardens find poachers.

The last of the original Saint Hubert Hounds are believed to have been lost in the 1800s, when the French imported Bloodhounds from England. It is not clear whether or not any Saint Huberts survived the French Revolution, but it is considered unlikely. Any remaining stock would have been absorbed by the Bloodhound, which by then had been heavily refined as it's own breed. Despite this, some countries in continental Europe still refer to the Bloodhound as the Saint Hubert Hound or Chien de Saint-Hubert.

Due to the high regard the Bloodhound carried in England, it was one of the first dogs imported into the new American Colonies. Some sources state they arrived in the early 1600s, however these dogs would have not been the Bloodhound as we know it today. In the New World, their primary use became tracking humans. It has an unfortunate history with Native Americans and runaway slaves. The Bloodhound would later be used to develop many of America’s own breeds, particularly in the south, such as the coonhounds.

After the World Wars, the Bloodhound’s numbers were low in Europe and virtually non-existent outside of the United Kingdom. Most of today’s dogs are descended from the American and Canadian lines.

It is believed over the centuries that the temperament of the Bloodhound greatly altered. There are many descriptions of these dogs accompanying men into battle and legends of demon dogs throughout the British Isles are often depicted as Bloodhounds. Today the Bloodhound is far from an aggressive dog or even a protector. They adapt easily to life as a family pet, while many continue the working roots, specifically aiding military and police forces around the world.