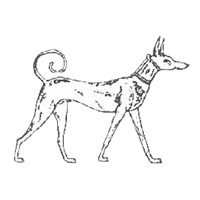 As with many extinct “breeds” the Tesem was a type of dog rather than a breed as we know today. Tesem roughly translates to “Hunting Dog” and was kept by the Ancient Egyptians. These dogs served priceless roles as hunters, guards, and companions. The Tesem was primitive in appearance, displaying prick ears, long legs, and curled tails. It is believed that both the Basenji and Africanis are descendants of of the Tesem. It is also likely they influenced, if not directly led to the development of the African and Middle Eastern sighthounds such as the Saluki, Azawakh, and Sloughi.

Images of the Tesem and other dogs litter Ancient Egyptian artifacts and hieroglyphics. One of the oldest dating back to the Protodynastic Period (3200 BC to 3000 BC). The Egyptians deified the dog through the jackal-headed God Anubis. Their dogs were even mummified so they could share their master’s tombs.

While the Egyptian Dynasties eventually came to an end, some argue that the Tesem has in fact continued on under several names. Possibly still existing as feral pariah dogs in the northeastern part of the African continent.