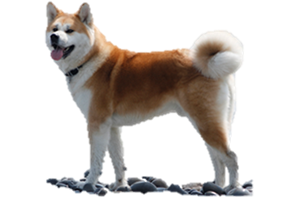 The Akita Inu is one of six native Japanese dogs that in Japan are classified by size because they are so similar in type. The Akita is the only large breed and the Shiba Inu the small. The last four are medium, Kai Ken, Hokkaido Inu, Kishu Ken, and Shikoku Inu. The Akita Inu is named after the Akita prefecture, Inu simply translates to ‘dog’.

The Akita Inu was once used to hunt large prey such as deer and boar, however it also has a history in the dog fighting ring. Today they are kept almost exclusively as companion or guardian. Although in Japan they have been used as police dogs, property guards, and some are still used to hunting.

History of the Akita Inu

​Recent DNA testing has revealed that the Akita Inu is one of the oldest recognized breeds of dogs. Japanese history tells us that the ancestor of the modern day Akita Inu was the Matagi Inu, which literally  means "hunting dog". Although having existed for centuries, it is impossible to know when the Akita Inu first arrived in Japan.

It is known that around 1630 dog fighting became popular in Japan, and would continue to be until the early 1900s. Matagi Inus were crossed with other local dogs to create animals more appropriate to fight amongst themselves. These dogs became known as the Odate Inu. In 1897 the Tosa was introduced to the Akita prefecture. Stronger and heavier, the Odate Inus originally triumphed over the Tosa, but then the Tosa breeders began crossing their dogs with others to improve their performance. The Odate Inu breeders did the same, introducing mastiff type dogs such as the Saint Bernard to their bloodlines. Thus the original Odate Inu/Akita began to disappear. Replaced with Shin-Akita, or ‘New Akita’.

In 1909 dog fighting was outlawed in Akita. A year later a tax was levied on dog owners to curb the sport. Many dogs were destroyed or turned loose, and a rabies outbreak caused the government to exterminate all feral dogs. Pushed to the brink of extinction, purebred dogs could no longer be found in Odate. However, some in secluded villages still kept Matagi Inus as guard dogs and for hunting.

In 1915 fanciers began the search for purebred Japanese dogs and were able to get the government to enact the Natural Monument Legislation in 1919 to protect the native breeds. Unfortunately, the Akita Inu was not included during that time. It was still seen primarily as a modern dog, bred specifically for fighting. The Akita Inu would not be accepted into that group until 1931.

It was decided by Japanese fanciers to focus on the Mataji Akita, returning the breed to its natural state. However, the German Shepherd Akita would live on in the western world. Servicemen from the United States fell in love with the Akita, but brought home the German Shepherd crosses (and sometimes Fighting Akitas). Americans prefer the larger Akitas, creating a distinct difference between the two lines. Today the American Kennel Club still only recognizes one Akita. However, all the other major kennel clubs recognize two, the Akita Inu and American Akita.​