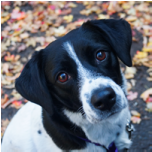 We adopted Luna in May of 2014 at an approximate age of 2 ½ years. Originally she had some serious issues with strangers and is extremely attached to mom. Training is a big part of her life and she loves having a job to do. She is currently involved in Trick Dog and Scent Work, and holds titles in both. Aside from training she loves playing fetch, staring down our cat, and playing with ‘her’ Ella. 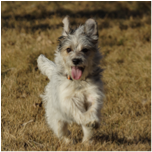 Ella was adopted in February of 2015 at five months. We were a little concerned adding another dog to our household, but Luna and Ella tightly bonded right away and love to rough house. She is very happy go lucky and still doesn’t have a favorite person. She is currently involved in Trick Dog and Rally, and holds titles in both. 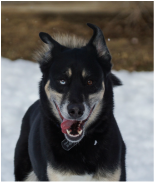 ​Charlie joined our household in late January of 2016, although I have known him since 2014. The largest of our pack, he is very laid back but can have high energy. He prefers to spend his time with dad, but also training and learning new tricks. 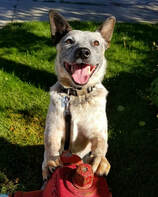 ​Stark is the newest member of our pack, and joined us in late August of 2017. I wasn't planning to have another dog at the time, but when I was contacted by someone at my vet office looking to find him a home I offered to foster. He is now my first foster fail. This guy just wormed himself into our hearts and even though he is a LOT of work, he's worth it. I've become a better trainer and handler because of him. 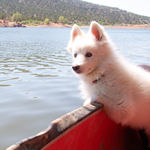 My dad saved Sprite on his last day at the shelter and gave him to me when I was 18. When he was young Sprite was a running trouble maker, but he was always a loving, fluffy fur ball. Unlike many Eskie’s he was a poor watchdog, welcoming anyone that would pet or feed him.

Originally a close friend’s dog, Ari came into our home when he could no longer keep her anymore due to landlord issues. I later told him she was the greatest gift I have ever received. My vet once described Ari as ill-bred, which was entirely true. I always joked that she was JRT crossed with a pot belly pig – earning her the loving nickname of Piggy. She loved water and was eager to get wet either in her “Piggy Pool” or a mud puddle. 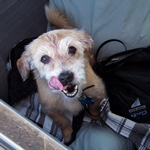 I always guessed that Miley was terrier and Dachshund, but we always just told people “She’s a Miley”. She had been part of my life since I was 17 - saw me through my first marriage, divorce and second marriage. Always at my side, there were times that she was literally my only friend. I often wondered if she saw me as the mom or herself in that role. She was certainly the boss in our house, never assertive, just having the air of being the ‘elder’. 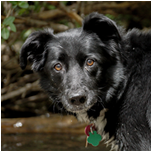 ​Originally my dad’s dog, Boots came to live with us after my stepmother passed away. Although she had known me her entire life she was all about my husband. She loved to follow around her 'bro-dad' and often outplayed the younger dogs. Smart and loving, she had the best temperament and was always eager to please.