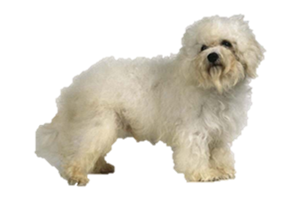 A favorite of the noble and wealthy, the Bolognese has always been kept solely as a companion animal. They are named for the city of Bologna, located in northern Italy, although historically they were found throughout the region. Although little known outside its homeland it remains popular inside Italy’s borders.

The Bolognese is one of several breeds included in the bichon family of dogs, the others being the Bichon Frisé, Maltese, Coton de Tuléar, Russian Tsvetnaya Bolonka, Löwchen, and Havanese.

History of the Bolognese

​Although the exact ancestry of the Bolognese is unknown, it has been a popular companion dog in Italy since at least the 11th century. Since the history of the entire bichon family is debated it is unknown where exactly the Bolognese originated from, other than somewhere in the Mediterranean. Some have theorized that these small dogs descended from Asia, others from a spitz-type breed from Switzerland. Since dogs very similar to the Maltese have been known since 500 BC and it was famously kept by both the ancient Greeks and Romans it seems likely the other bichons are descended from them. If we are to take the Maltese as their ancestor it is likely the bloodline was crossed with one, or several, curly coated breeds at one point, possibly the Barbet, Poodle, or Lagotto Romagnolo.

However it came to be, the Bolognese was a staple across Europe from the 1200s to the 1700s. Often given as gifts by nobility, it has been suggested that these dogs became the basis for the Bichon Frisé, Löwchen, and other bichon relatives. It is also believed that the Bolognese played a part in the development of the Russian Tsvetnaya Bolonka.

Like many breeds, both World Wars, along with a gradual fall from favor, brought the Bolognese close to extinction. By the middle of the 20th century it had become difficult to find breeding examples, but was saved by dedicated fanciers in France, Italy, and the Netherlands. Today it can once again be found throughout Europe and has even made its way to North America.