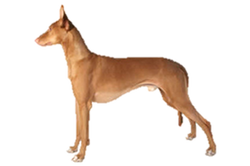 The National Dog of Malta, the Pharaoh Hound, belongs to the family of primitive sighthounds found throughout the Mediterranean. It includes the Cirneco dell’Etna, Ibizan Hound, Podenco Canario, and the Portuguese Podengos Grande.

The term ‘sighthound’ is a bit misleading as the Pharaoh Hound uses sight, scent, and hearing while hunting. Originally known as the Kelb-tal Fenek (meaning Rabbit Hound), this breed specializes in rabbits in the remote regions of Malta. They can also be used to hunt other small prey, and some have been trained to retrieve birds.

In their homeland the training of these dogs is serious, beginning when the pup is only four or five months of age. They are taken out to a field where rabbits are known to be with an experienced adult dog to hunt. Dogs that do not show interest in the game are culled. This same process is repeated several times. Dogs that have no scenting ability are also culled. However, this is tested when the dogs are around a year of age. Traditionally, they are kept in large packs by hunters, but some prefer to work a pair of dogs.

Somewhat uniquely for a hound, the Pharaoh Hound has also been known to herd goats and sheep on the small Maltese island of Gozo. They often had a double role working as guardians of both livestock and property throughout Malta.

History of the Pharaoh Hound

​Like the other Mediterranean sighthounds, the true origin of the Pharaoh Hound has been lost in time. The most commonly held theory is that their ancestors were brought to Malta by the Phoenician traders via Egypt. If this  is correct, it is likely all hounds in this grouping descend from the ancient Tesem. However, this is a simplified version. The first human inhabitation of Malta is thought to have taken place around 5200 BC. Many believe these settlers arrived from Sicily. This would point to the Cirneco dell’Etna ancestry. Although how the Cirneco itself arrived in Sicily is also debated and often traces back to the Phoenicians.

​During the 1920s the name Pharaoh Hound was actually used to describe all the Mediterranean sighthounds. This was due to their similarities with the dogs found on Egyptian artifacts and tombs. It was not until 1977 that separate categorization of the individual breeds occurred. As the Kelb Tal-Fenek had already been recognized by the Kennel Club as the Pharaoh Hound it retained that name.