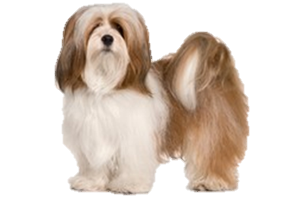 In their homeland the Lhasa Apso is known as Apso Seng Kye meaning ‘Hairy Lion Dog’. Today they are kept solely as companions, however, in its early years it also worked as a watchdog. Small in stature, they were used as alarms to alert the larger Tibetan Mastiff when a stranger approached.

History of the Lhasa Apso

​One of the oldest breeds, the Lhasa Apso was kept by the Tibetan monks for centuries, isolated in their monasteries. Where they came from is unknown although some have guessed that they may be descended from smaller pups born to the larger Tibetan Terriers. These pups were in turn given to the monasteries. The monks believed that when they died, it was possible they would be reincarnated as a Lhasa Apso and when a dog passed, it could be born as a human child.

A sacred part of Tibetan culture, they were treated with great care and guarded jealously from the outside world. It was impossible to obtain them through purchases. However, in rare circumstances from the 16th and 20th centuries the Dalai Lama would send them as diplomatic gifts, most often to China. Through these gifts it is believed the Lhasa Apso helped develop the Shih Tzu, Pekingese, Japanese Chin, and Pug. Although is is unknown at what stage of development and how heavy their influence.

When dogs were first imported to the western world, there were two varieties, one known as Lhasa and the other as Apso. Similar in type, the Apso was golden colored and had a slightly longer body. They were also mislabeled as Lhasa Terriers. In 1944 fanciers convinced the American Kennel Club to change the name to Lhasa Apso, and both varieties were interbred.