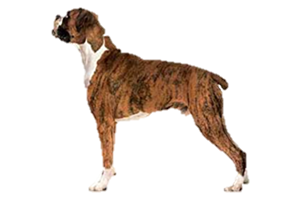 ​Originally the Boxer was used for hunting boar and bear. Today they are a popular companion breed, as well as a watchdog, police and military dog. It has been said that their name was derived from their tendency to play by standing on their hind legs and “boxing” with their front paws. In German ‘boxer’ translates to ‘prize-fighter’, so it may have been selected for their fighting abilities.

History of the Boxer

​The primary ancestor of the Boxer was the old Bullenbeisser, which was used in Germany and the Netherlands for hunting boar and deer. Some sources also state that the Barenbeisser may also have been used, but it is also disputed whether or not the two breeds were one in the same. Bullenbeisser translates to ‘bull-biter’, while Barenbeisser is a ‘bear-biter’. In the late 1870s three German breeders – Roberth, Konig, and Hooper, crossed the Bullenbeisser with the old-type Bulldog and early Mastiffs from England which formed the basis for today's breed.