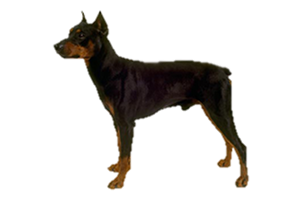 The German Pinscher was originally a working farm dog, primarily used to control vermin such as rats. They also acted as property and livestock guards, and occasionally found work as drovers. Today they are commonly kept as household pets and remain relatively rare outside of Germany.

History of the German Pinscher

​The German Pinscher is a terrier that originated in Germany, where they are known as the Deutscher Pinscher. ‘Pinscher’ is the Germanic form of the French word ‘pincer’ meaning ‘to seize’ or ‘to nip’. The name German Pinscher began appearing in dog books in the 1880s, but drawings and paintings show them going back to at least 1780. In those early days a smooth and wire haired variety existed and both were born in the same litter. The wire haired would eventually become the Standard Schnauzer and overtime the two became breeds instead of varieties. The German Pinscher would go on to become the ancestor of several other breeds, most notably the Doberman and Miniature Pinscher, both of which now overshadow the breed.