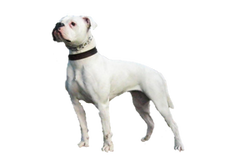 Today the American Bulldog is kept primarily as a companion, although in the past it was unfortunately used in pit contests, but also on farms as cattle-catchers or catch dogs. It was the dog's responsibility to attack and subdue runaway cattle and also to protect them from feral dogs. It is said that one American Bulldog could take on an entire pack. They are also capable of hunting feral pigs and razorbacks.

History of the American Bulldog

The American Bulldog was developed in the southeastern United States. There are two disputed views to its origin, the first is that it is directly descended from the extinct old-type Bulldog and its closest living relative.The competing theory is that it is a newer breed, developed as a recreation from crosses of Bulldog, American Pit Bull Terrier and the Bullmastiff.