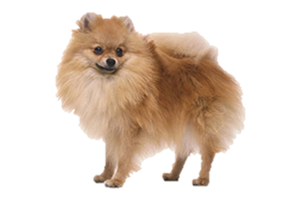 The Pomeranian is a small companion breed. In their homeland they are recognized as the smallest of the five size varieties of the German Spitz, the Zwergspitz or Toy. Most kennel clubs view the Pomeranian as its own separate breed rather than as its German counterpart.

History of the Pomeranian

​The Pomeranian was heavily developed in Pomerania, which is present day Germany and Poland. They were bred down from the larger German Spitz varieties and were originally larger than present day, closer in size to the Medium German Spitz. In 1888 Queen Victoria was sent a dog named Marco from Florence, Italy, which became her beloved companion and helped spark the popularity of the breed. The Queen kept her own kennels and helped the breed become established in the United Kingdom and was an advocate for the smaller dogs we see today.